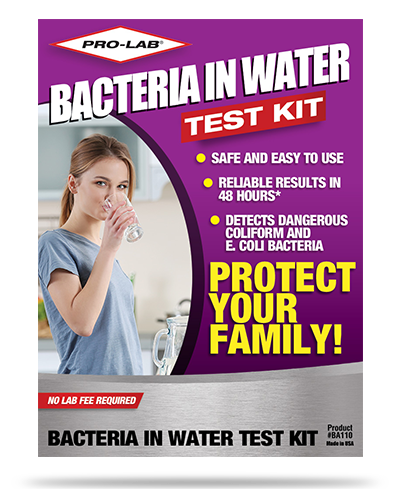 According to the Environmental Protection Agency (EPA), total coliform and E. coli bacteria testing is recommended to indicate the presence of organisms that can cause serious disease. Test your drinking water to be sure it is free of harmful baterial contamination.

WHAT ARE BACTERIA IN WATER?

HOW DO YOU COME IN CONTACT WITH BACTERIA IN YOUR WATER?

Coliform bacteria from human and animal wastes are indicators of the sanitary quality of your water. Drinking water and swimming pools get contaminated from leaking septic tanks, failing leach fields, sewer malfunctions and overflows, animal manure or direct drainage from rain and snowmelt runoff.

Bacterial contamination is a serious water quality problem for individual private and small community wells partly because private water supplies are not required by law to be tested. Families drinking non-chlorinated water (such as from an underground well) and apartment dwellers with rooftop wooden storage tanks are especially vulnerable to bacterial contamination. Home water treatment devices may also become a breeding ground for bacteria.

WHAT CAN BACTERIA IN YOUR WATER DO TO YOU?

HOW DO YOU FIND OUT IF YOU HAVE HARMFUL BACTERIA IN YOUR WATER?

To find out if bacteria are a problem in your water, you must test. The PRO-LAB® Bacteria in Water Test Kit offers two (2) types of testing methods. The first method simply involves counting the number of colonies that are growing on the petri dish. The second method (optional) requires sending the petri dish to PRO-LAB® for a more detailed analysis ($40 lab fee required), which will identify the type of Fecal Coliform Bacteria present in your water.

If you cannot find the PRO-LAB® Bacteria In Water Test Kit in any of the stores above, please call 954-384-4446 to purchase.